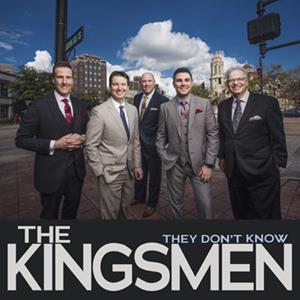 This past week, Kyle and Daniel introduced a fresh type of CD review, a “Take 2.” We’ll be doing these from time to time to allow another writer to react to a previous review or simply write their own independent review.

Under the microscope today is They Don’t Know by the Kingsmen, which Kyle reviewed three months ago. Click HERE[1] to check out his original review.

Right out of the gate, They Don’t Know takes the Kingsmen in a new stylistic direction. “They Don’t Know” and “Keep The Lions Hungry” are closer to the driving, heavily compressed music Brian Free & Assurance has recorded in recent years. That’s not a good or bad observation. These two selections just may not be quite what you were expecting from the Kingsmen.

“God Calls It Grace” is an excellent ballad for tenor Josh Horrell, and Bob Sellers is strong on “Hear The Word Of The Lord.” With these two tracks, the CD glances at a territory of the musical landscape that is a little more familiar to Kingsmen fans, but “The Evidence I Need” swings back to a pop-ballad format.

At this point, someone in the studio must have suggested that the CD ought to include at least one convention song for old-time Kingsmen fans to enjoy. That song is Ila Knight’s “I’ll Sail Away Yonder.” Ray Dean Reese is granted a step-out line on each of the choruses. You really to notice this, because nothing like that will happen again for the rest of the CD.

“Cost Of The Cross” is another excellent pop ballad; “Let Go And Hold Fast” is another horn-driven up-tempo song; “Fade To Black” goes back to the pop ballad formula; “Don’t Underestimate God’s Grace” features some nice steel guitar work by David Johnson on a mid-tempo Country arrangement; and, finally, “Legacy” closes They Don’t Know with a slow B-3 organ driven arrangement and a lyric that acknowledges those who paved the way.

Before this CD was released, there were some funny comments circulating on Facebook about the title They Don’t Know. One exchange I remember is, “What is the CD’s title?” “They don’t know; I mean they DO know. They Don’t Know IS the title.” After hearing this CD off and on for the three months since it’s release, I would add “They don’t know they have a bass singer!” This is essentially a male trio recording with bass vocals thrown into the harmony as an afterthought.

Aside from the difference in tenor vocal tone, They Don’t Know sounds very much like a Brian Free & Assurance recording right down to the excellent ballad about the cross that we’ve come to expect on every BF&A release. Long-time Kingsmen quartet fans probably didn’t expect this much of a stylistic departure, but as I stated above, it’s not necessarily a bad thing.

I agree with Kyle’s rating of 3.5 Stars, but not his conclusion that the song selection on this CD is less strong than recent Kingsmen CDs. I like most of these songs, particularly “Cost Of The Cross” and “Don’t Underestimate God’s Grace.” I’m docking points because the vocal arrangements should have been more inclusive of all the singers. (WHERE’S THE BASS?) Also, some songs on They Don’t Know feel over-produced. The horn lines are somewhat distracting on the quicker tracks. A simpler approach to instrumentation would have allowed the lyrics and vocal performances to shine more effectively.